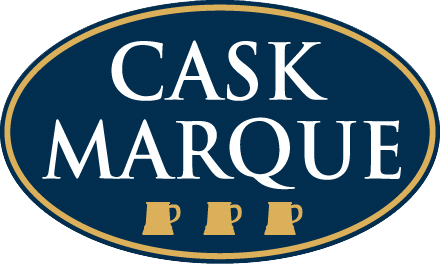 Another Quality Award for The Plough & Harrow.

The ‘Cask Marque’ is an award for pubs which serve great quality cask ale.

Cask Marque is an independent company funded by brewers, pub groups and trade bodies (see below) with the aim of improving beer quality through an accreditation scheme.
Qualified assessors make over 20,000 visits a year to over 9,000 pubs which hold the award.
They test for temperature (to score full marks the beer should be between 10 – 14 degrees), appearance, aroma and taste.
All beers must make the grade to pass the visit.
Accredited pubs are then promoted through the CaskFinder App, CaskFinder Online and through the plaque and point of sale at the pub.
Recent independent research by Cardinal for the 2014 Cask Report identified that 71% of beer drinkers recognised the Cask Marque plaque as a badge of quality.

Our classic, golden Amstel Beer, with its very distinctive and mildly bitter taste, has over the years become well known beyond the borders of its native country.

Guinness is an Irish dry stout that originated in the brewery of Arthur Guinness at St. James's Gate, Dublin. Guinness is one of the most successful beer brands worldwide.

John Smith’s Extra Smooth was launched in 1993 and is now the nation's number 1 ale.

Kronenbourg 1664 is a lager with a noble history, characterized by its fine taste. Its golden hues and delicate bitterness come from selecting the best hops (the Strisselspalt), and the unique know-how of one of the French master brewers.

Strongbow gets its distinctive flavour and cut-through refreshment through the unique blends of bittersweet British cider apples from our Herefordshire orchards.

Crisp Strongbow cut with a blend of dark fruit

We use technologies, such as cookies, on this site as described in our Cookie Policy. Some of these cookies are essential for the website to function. Other cookies are used for analysing the performance of the site, gaining insights and personalising adverts to your interests – we won’t set these without your consent. You can accept all cookies or set your own preferences using the buttons below.

Cookies are very small text files that are stored on your computer when you visit a website. We use cookies for a variety of purposes and to enhance your online experience on our website (for example, to remember your account login details).

These cookies are used to provide you with a more personalized experience on our website and to remember choices you make when you use our website.

For example, these cookies may track things such as how long you spend on the website or the pages you visit which helps us to understand how we can improve our website site for you.

The information collected through these tracking and performance cookies do not identify any individual visitor.

These cookies are used to show advertising that is likely to be of interest to you based on your browsing habits.

These cookies, as served by our content and/or advertising providers, may combine information they collected from our website with other information they have independently collected relating to your web browser's activities across their network of websites.

If you choose to remove or disable these targeting or advertising cookies, you will still see adverts but they may not be relevant to you.